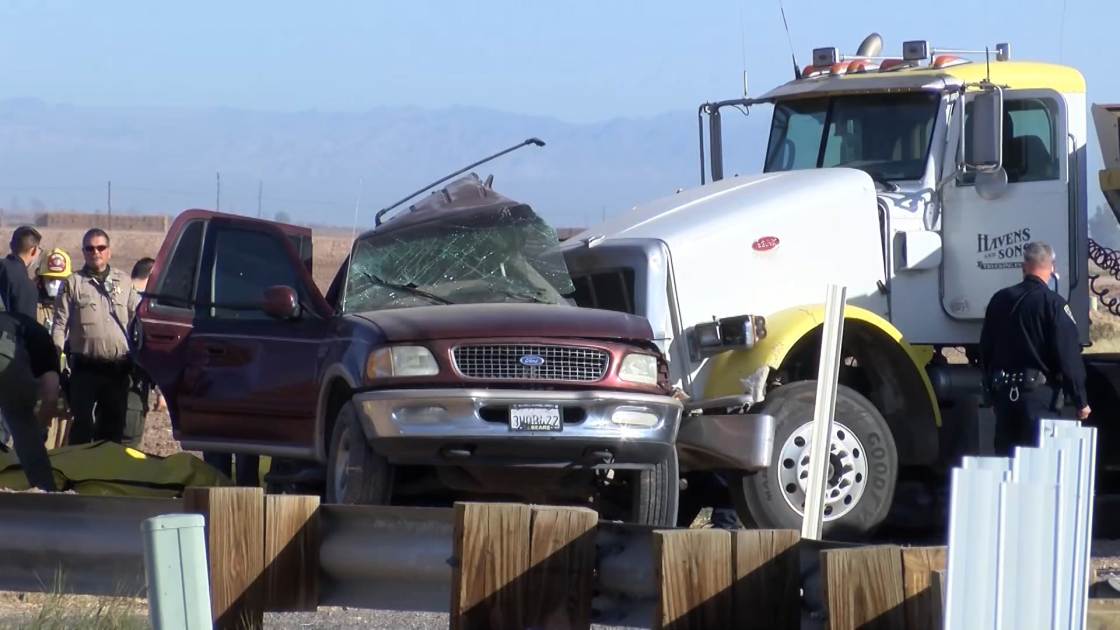 2 MARCH 2021
15 killed in major vehicle crash in Imperial County, California
(CNN)An SUV packed with people crashed into a semitruck in Imperial County, California, on Tuesday morning, leaving 15 dead and others hospitalized, hospital officials said. There were 27 passengers in the SUV that struck a semitruck full of gravel, said Judy Cruz, the managing director of the Emergency Room Department at El Centro Regional Medical Center. She said 14 people were dead on the scene, and another person died shortly after arriving at the hospital. Other passengers are being treated at El Centro Regional Medical Center and at Pioneers Memorial Hospital in nearby Brawley. "Patients are going through a difficult time as you can imagine," El Centro Regional Medical Center CEO Adolphe Edward said. "This was a major accident and we are taking care of them in the emergency room department." Source

Proclamation on the Termination Of Emergency With Respect To The Southern Border Of The United States And Redirection Of Funds Diverted To Border Wall Construction ﻿
JANUARY 20, 2021 • PRESIDENTIAL ACTIONS
BY THE PRESIDENT OF THE UNITED STATES OF AMERICA
A PROCLAMATION

Like every nation, the United States has a right and a duty to secure its borders and protect its people against threats. But building a massive wall that spans the entire southern border is not a serious policy solution. It is a waste of money that diverts attention from genuine threats to our homeland security. My Administration is committed to ensuring that the United States has a comprehensive and humane immigration system that operates consistently with our Nation’s values. In furtherance of that commitment, I have determined that the declaration of a national emergency at our southern border in Proclamation 9844 of February 15, 2019 (Declaring a National Emergency Concerning the Southern Border of the United States), was unwarranted. It shall be the policy of my Administration that no more American taxpayer dollars be diverted to construct a border wall. I am also directing a careful review of all resources appropriated or redirected to construct a southern border wall.
NOW, THEREFORE, I, JOSEPH R. BIDEN JR., President of the United States of America, by the authority vested in me by the Constitution and the laws of the United States of America, including section 202 of the National Emergencies Act (50 U.S.C. 1601 et seq.), hereby declare that the national emergency declared by Proclamation 9844, and continued on February 13, 2020 (85 Fed. Reg. 8715), and January 15, 2021, is terminated and that the authorities invoked in that proclamation will no longer be used to construct a wall at the southern border. I hereby further direct as follows:

Section 1. Pause in Construction and Obligation of Funds. (a) The Secretary of Defense and the Secretary of Homeland Security, in consultation with the Director of the Office of Management and Budget, shall direct the appropriate officials within their respective departments to:
(i) pause work on each construction project on the southern border wall, to the extent permitted by law, as soon as possible but in no case later than seven days from the date of this proclamation, to permit:
(A) assessment of the legality of the funding and contracting methods used to construct the wall;
(B) assessment of the administrative and contractual consequences of ceasing each wall construction project; and
(C) completion and implementation of the plan developed in accordance with section 2 of this proclamation;
(ii) pause immediately the obligation of funds related to construction of the southern border wall, to the extent permitted by law; and
(iii) compile detailed information on all southern border wall construction contracts, the completion status of each wall construction project, and the funds used for wall construction since February 15, 2019, including directly appropriated funds and funds drawn from the Treasury Forfeiture Fund (31 U.S.C. 9705(g)(4)(B)), the Department of Defense Drug Interdiction and Counter-Drug Activities account (10 U.S.C. 284), and the Department of Defense Military Construction account (pursuant to the emergency authorities in 10 U.S.C. 2808(a) and 33 U.S.C. 2293(a)).
(b) The pause directed in subsection (a)(i) of this section shall apply to wall projects funded by redirected funds as well as wall projects funded by direct appropriations. The Secretary of Defense and the Secretary of Homeland Security may make an exception to the pause, however, for urgent measures needed to avert immediate physical dangers or where an exception is required to ensure that funds appropriated by the Congress fulfill their intended purpose.

Sec. 2. Plan for Redirecting Funding and Repurposing Contracts. The Secretary of Defense and the Secretary of Homeland Security, in coordination with the Secretary of the Treasury, the Attorney General, the Director of the Office of Management and Budget, and the heads of any other appropriate executive departments and agencies, and in consultation with the Assistant to the President for National Security Affairs, shall develop a plan for the redirection of funds concerning the southern border wall, as appropriate and consistent with applicable law. The process of developing the plan shall include consideration of terminating or repurposing contracts with private contractors engaged in wall construction, while providing for the expenditure of any funds that the Congress expressly appropriated for wall construction, consistent with their appropriated purpose. The plan shall be developed within 60 days from the date of this proclamation. After the plan is developed, the Secretary of Defense and the Secretary of Homeland Security shall take all appropriate steps to resume, modify, or terminate projects and to otherwise implement the plan.
Sec. 3. Definition. Consistent with Executive Order 13767 of January 25, 2017 (Border Security and Immigration Enforcement Improvements), for the purposes of this proclamation, “wall” means a contiguous, physical wall or other similarly secure, contiguous, and impassable physical barrier.
Sec. 4. General Provisions. (a) Nothing in this proclamation shall be construed to impair or otherwise affect:
(i) the authority granted by law to an executive department or agency, or the head thereof; or
(ii) the functions of the Director of the Office of Management and Budget relating to budgetary, administrative, or legislative proposals.
(b) This proclamation shall be implemented consistent with applicable law and subject to the availability of appropriations.
(c) This proclamation is not intended to, and does not, create any right or benefit, substantive or procedural, enforceable at law or in equity by any party against the United States, its departments, agencies, or entities, its officers, employees, or agents, or any other person.
IN WITNESS WHEREOF, I have hereunto set my hand this twentieth day of January, in the year of our Lord two thousand twenty-one, and of the Independence of the United States of America the two hundred and forty-fifth.
JOSEPH R. BIDEN JR.
Source