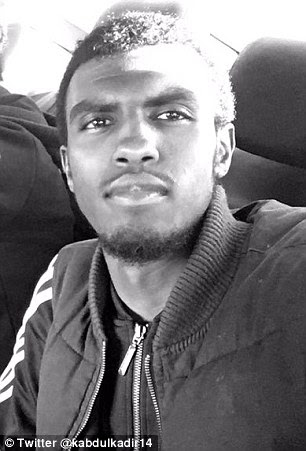 'Kill them FBI': Minnesota teen who was being watched after 'planning to join ISIS in Syria' is arrested for threatening to kill federal agents on Twitter

A teenager from Minneapolis being watched over fears he was planning to travel to Syria to join ISIS has been arrested for threatening FBI agents online. Khaalid Adam Abdulkadir, 19, was arrested on Friday for tweeting 'kill them FBI' and 'I'm kill them FEDS for take my brothers' and is charged with impeding and retaliating against a federal officer. Abdulkadir posted the messages after his friend Abdirizak Mohamed Warsame, 20, was also arrested on Wednesday over fears he was about to leave the U.S. for Syria to join the terror group. An affidavit showed that Abdulkadir had been on the radar of the security services for some time and was exchanging messages with another former Minnesota native, Mohamed Abdullahi Hassan Daily Mail Read More>>>