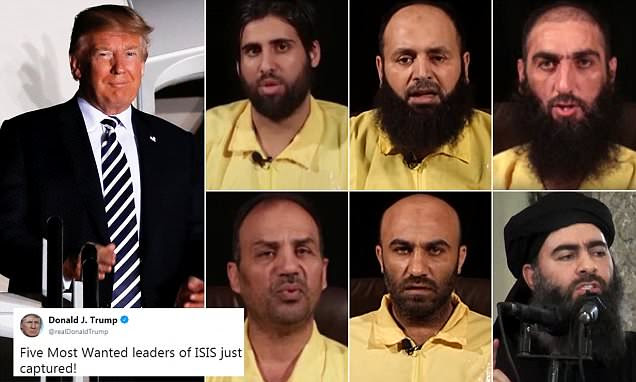 A jubilant President Trump tweeted on Thursday to announce that five of the 'Most Wanted leaders of ISIS' have been captured after they were lured from Syria to Iraq with fake Telegram messages. Iraqi officials used the cell phone of already captured ISIS lieutenant Ismail al-Eithawi to send instructions via the app for the four other leaders to come to Iraq, where they were seized. The encrypted app was officially named by ISIS as one of its favored mobile messaging services in 2015 and has been regularly used by the terror group for private communication and to spread propaganda. Al-Eithawi, who also uses the alias Abu Zaid al-Iraqi, was captured in February by Turkish intelligence and handed over to the Iraqis. Eithawi was a direct aide to ISIS leader Abu Bakr al-Baghdadi, responsible for fund transfers to the group's bank accounts in different countries. Saddam al-Jamal, a Syrian who was accused of taking part of a massacre in the province of Deir Ezzor in 2014 which killed 700 members of a tribe that rose up against ISIS, was the second most senior member to be captured. Source